Wow! That was one very impressive storm system that blew through Raleigh. And still, even at 9:00 this morning, it is more blowing gale-force winds and knocking more debris out of the trees.

There was an instant Thursday afternoon – probably 15 minutes or so – when the hair stood up on the back of my neck and I wondered if a tornado may just be barreling up our cul-de-sac. It was not an unfounded instinct, it turns out, as activity was confirmed not far away at the exact same time.

It was the same time the dark red line on the radar crossed 98 and intersected with Wake Forest. Hail, high winds, then heavy rain. It was all very dramatic.

Then this morning there is this beautiful combination of sunshine and heavy winds. It reminded me – heading out for my morning walk – of hiking along the seashore in England. It’s something I hadn’t even thought of in years. The salty spray coming off the English Channel, air you could literally taste sometimes a mile inland. It was one of my favorite family walks, either up on the clifftops or down on the promenade by the beach. The experienced conjured up the word “bracing.” Windbreakers wrapped tight, hands deep in pockets, drinking in the freshness of the air, drinking in life.

It makes me think of other glorious windblown experiences. An epic hike with Rebekah on top of Mount Washington in New Hampshire, braving the howling cold wind and the ice for some of the most spectacular views ever. Standing on a rock outcropping at St. David’s Head in Wales, waves crashing in from thousands of miles of unbroken Atlantic Ocean, deep blue skies overhead and gale force winds pummeling the shore. On the clifftops, walking out to the lighthouse at Point Reyes National Seashore just north of San Francisco. Braving the exposed deck of the cruise ship, trying not to be blown over during a storm off Juneau Alaska. Cresting the summit of Mt. Sinai in Egypt to feel the sudden rush of penetrating 28-degree winds prior to watching the sun rise over the desert. Literally leaning more than 45-degrees, held up by buffeting winds on the North Downs Trail behind Folkestone in the south of England.

It’s easy to only think about the interruptions and inconveniences of severe weather, and I don’t discount the fact that storms often wreak havoc and cause damage. But there is also something majestic and wondrous about “nature’s fury” that speaks of the untamed majesty of creation.

We cannot subdue the Earth, so it makes sense to learn to get along with it, demonstrating more respect for its extremes and more care for it’s vulnerabilities.

All of Creation, Paul writes in Romans 8, is anxious to see how human beings will – one day – begin to understand that redemption is more than just a spiritual principle, it should be how we relate to this planet, too. 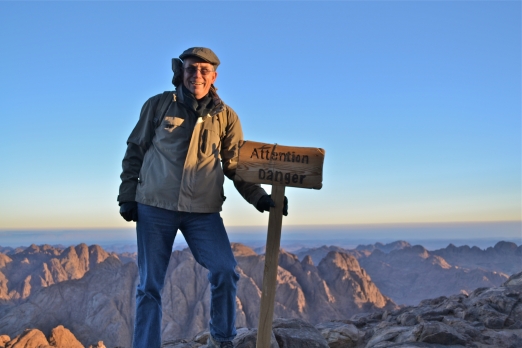 me up on Mt Sinai

Folkestone – image from the Web