Early on the first day of the week, while it was still dark, Mary Magdalene went to the tomb and saw that the stone had been removed from the entrance. – John 20:1

I’ve talked about perspective before in this space. I’ve even used the same basic illustration. But this morning, once again but from a different angle, I was again struck by how completely different something can appear based on where I am standing, the time of day, the atmospheric conditions, the season, and so much more.

But I’m not too worried about repeating myself. First, everything I share in this space is simply another take on my essential message about light, life, faith, and passion. Then, there’s this story from a recurring speaking engagement I had in Florida:

Every February for several years I was invited to speak at a community men’s breakfast in Zephyrhills, just north of Tampa. On one occasion I opened my remarks by explaining that I’d lost my notes from the previous year, “So please forgive me if I repeat anything you’ve already heard.,” I said. At that point, an older gentleman called out, “Most of us are over 70! It’s Tuesday morning and we don’t even remember what the preacher talked about Sunday. You could say exactly the same thing every year and it would be brand new for us!”

So here we go. Next verse same as the first. But it’s a message I’m seriously concerned this nation isn’t getting, and I’d like to see “all hands on deck” in spreading the word.

Today I took a different route for my early walk. So I found myself on the street behind our home, looking back toward the house in the morning light. I’ve included both the standard front view (taken yesterday) and the way the I saw things earlier today.

I haven’t “Photo-shopped” the images. It’s all the same house. No fake-news here….

And I can’t help but think about the way we approach healthcare, and religion, and the right to bear arms, and race, and equality, and immigration, and redistricting, and war, and so much of what divides us.

We stand at one side of an issue, and we see things as clearly as we can, and then we don’t move an inch.

Well, there’s always a lot more to know. About absolutely everything.

I’d love to be a fly on the wall when some folk get to chat with God over coffee or a beer their first week in Heaven.

There is always more to know, to learn, to uncover, and to understand – I believe this learning curve will continue into eternity.

But don’t wait for eternity, open your hears and your minds and your spirits now! 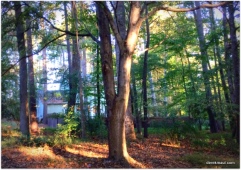 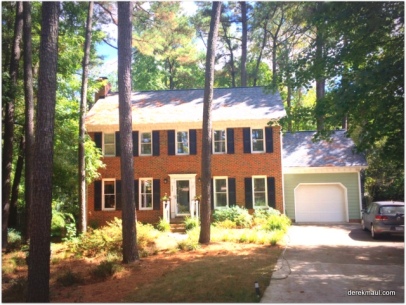