So what do we need to be satisfied? #7DeadlySins

But God shows his love for us, because while we were still sinners Christ died for us. So, now that we have been made righteous by his blood, we can be even more certain that we will be saved from God’s wrath through him. If we were reconciled to God through the death of his Son while we were still enemies, now that we have been reconciled, how much more certain is it that we will be saved by his life? – Romans 5:8-10

Sunday morning – and just in time because next week is Palm Sunday – Rebekah completed her 9-week series on The Seven Deadly Sins, the seven foundational sins traditionally understood to undergird the literally thousands we commit daily.

This week’s word was gluttony. It’s not that different from lust, and it’s not that far from greed. Gluttony is distinct in that it is not so much about possessing (greed) as consuming (gobbling up). It is the sin that in my mind has the most to say about our North American Culture. We have to have, we have to consume, and then – having sucked everything out -we discard, creating horrific mountains of waste that stand as much as monuments to excess as the empty, decaying, going-out-of-business shopping malls from which it all came.

Before the advances of modern medicine, tuberculosis was also known as “Consumption.” It got the name because the disease killed slowly and the victim appeared to be wasting away, a human body literally consuming itself, eventually succumbing to suffocation.

So I feel it is no coincidence that we have labeled our way of life a “Consumer-Culture.” There is a lot of evidence to suggest that we are gluttonously gobbling up resources (life) to the extent that we will eventually see the wasting away and shutdown of major organs.

Gluttony, Rebekah points out in her message, is incompatible with relationships. “The more we must have,” she said, “the farther from one another we become.”

Not only that, but gluttony is a sad and pathetic perseveration, it is investment in a dead-end agenda with no hope of achieving satisfaction or even closure because it is about consuming more and more of what will not and cannot satisfy in response to the misguided belief that all we need to be at peace is “more”.

But there is – and this is always true – good news. And this is why I am so glad we served communion at church the same day Rebekah spoke about gluttony. Communion teaches us two things about the antidote to gluttony:

When we consume what we were designed for then we are satisfied. Jesus talked not only about Living Water (John 4) but of “food you (the disciples) know nothing about…”

Listen again to the scriptures!

No need for gluttony to be satisfied, just Jesus. Just Jesus. 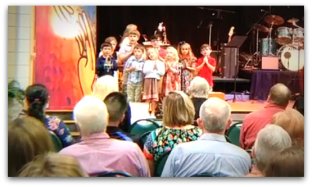 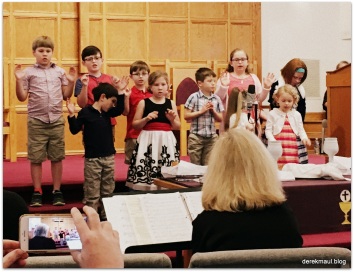