Today’s post is the result of a comment from a reader. The blog entry he references dates from a couple of years ago, but somehow he landed on that particular article just last week and – in consequence – shot me the following question:

“Just came across this site in my search for a men’s ministry book or curriculum for the guys in my church. Sounds intriguing! Would you classify your perspective as egalitarian or complementarian?” – Brady

I thought I understood what he was talking about but I looked up the terminology just to be sure. Apparently Complementarianism versus Egalitarianism is a thing, a position people debate in theological circles. Here’s a very simple summary:

In posing his question, Brady did not offer any clue as to where he stood. I found that extremely helpful because it made me think about my answer rather than simply reacting to his point of view. Thanks for that, Brady! If there is one thing we could use more of in our conversations it is thinking rather than reacting!

I understand this is a rather lengthy preface to wherever I intend to go in this post, but I believe background always helps the main point to come into focus.

So, now for my initial response to Brady’s question – and I’ll tell you up front that without Brady’s query I would not have been in the position to come up with this answer. I like my answer a lot, but it didn’t just bubble to the surface out of some “stash of wise things” I intrinsically know so much as emerge in response to thoughtful dialogue. And that, my friends, is more important than the answer itself!

“Hello! Short answer… I believe God calls individuals uniquely, not equally. I don’t believe our generalizations are all that helpful in making judgements.” – Derek

Okay, so this is the statement I’m excited about: “I believe God calls individuals uniquely, not equally.”

This is God’s prerogative. In the Old Testament, God called Deborah as a judge in a cultural milieu where women had very narrowly restricted roles – she turned out to be an amazing leader. God called Gideon as a judge, not because he was a man but because God had a plan for him. God called Paul as an Apostle because God wanted someone with an exceptional facility with language to help articulate early Christianity. God called Lydia as a leader in the early church because of how and where God intended to use her.

Brady’s next message was spot-on:

“Thanks for your quick response! I joyfully agree on the unique and individual nature of God’s callings. I don’t love generalities either, but sometimes they help save time I suppose. As a pastor, I’m eager to recommend to my church a resource that points men and women toward a Kingdom model for men and women (what I’d call ‘egalitarian’) as opposed to one that is based on the curse or ancient culture. I look forward to reading your book! Be blessed.” – Brady

God calls who God chooses to call, period. The Creator does not first check with us to see if our cultural preferences and prejudices would accommodate the purposes of The Almighty.

When Rebekah’s parents were expecting her (their third child) they prayed this would be the child God would lead into ministry – but the year was 1956. When she was born a girl they said, “I guess we were wrong. Not this one.”

One Sunday (in college) Rebekah went to the front of the church for prayer along with other students responding to the call to ministry. She was stopped, scolded, and then sent back to her seat. “God does not call women as pastors,” they said.

No, my point is that God calls individuals uniquely, not equally. This is not about equality, or about affirmative action, it is about God’s sovereign will and our obedience. And I love this Bible dictionary definition of God’s sovereignty: “God’s absolute right to do all things according to God’s own good pleasure.”

God calls who God will. It is our responsibility to follow. The call belongs to God and the response belongs to the person God calls.

In love, and because of love – DEREK 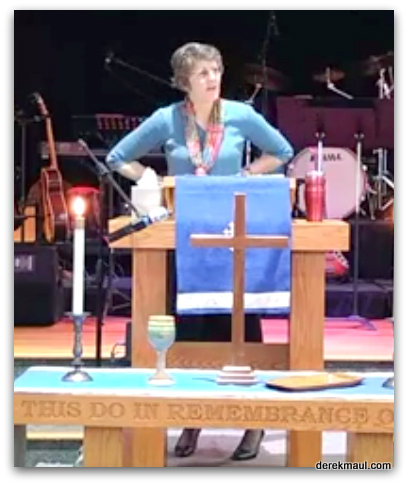