February 2015 has turned out to be one of the coldest on record for Wake Forest. In consequence, last Monday evening’s fairly small accumulation of snowfall not only stuck around for five or six days, it became icier and more slippery still as the week progressed.

People were falling left and right, and Rebekah eventually joined their ranks Thursday evening, hitting the deck hard enough to aggravate an old back injury. The pain grew progressively worse until – Sunday morning – she could barely make it across the room.

WHEELCHAIR PREACHING: This might have served as a great opportunity for our new associate pastor to get a solo Sunday under his belt; but John was in Pennsylvania for his grandfather’s funeral. Rebekah – who always steps up with so much raw courage – did an amazing job at the Praise Service, clinging white-knuckle to the pulpit with both hands; but the pain became so intense that she needed a wheelchair for 11:15.

Fortunately (or, should I say, providentially) my name was on the February calendar for “worship leader” duties, so I was already scheduled to sit with her up front. I was able to maneuver her wheelchair and – although Rebekah was obviously in a tremendous amount of pain – her message was powerful and the service went off without a hitch.

MOMENTS: A couple of poignant moments stand out: 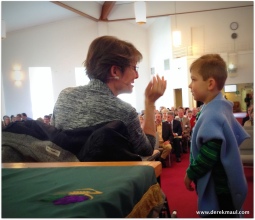 First, when Rebekah appeared in front of the congregation in a wheelchair, a sudden hush fell over the sanctuary. A small boy broke from the crowd and rushed up to see if she was all right. His little brow furrowed in concern. The service was delayed by a good two minutes while – much to everyone’s delight – they talked and he patted her lovingly on the arm.

Then, after the benediction, so many people followed the child’s lead, heading to the front of the church to touch base, to offer help, to pray, and to genuinely love on their pastor.

This really is a community defined by generous love and the faithful practice of grace. This weekend – exactly 18-months after Rebekah’s first Sunday in the pulpit – we realized just how deeply we have fallen in love with Wake Forest, and especially the beautiful gathering of disciples who meet at the Presbyterian Church.
– DEREK