Rarely a day goes by when I don’t see something that makes me want to take a photograph. But most of the time I just keep on going because I’m in a hurry, or it would distract from something else I’m doing, or – and this happened (or didn’t happen) in Florida two weeks ago – because I really can’t stop my car in the middle of an Interstate Highway, walk to the side of the bridge, climb over the barrier and record that amazing image of downtown Jacksonville at night, perfectly reflected in the St. Johns River. Ah, the deep angst of untaken photographs!

But regardless I do grab a lot of images, and some of them make their way into these posts. This morning I want to share just a few of the ones that didn’t make it this past week, plus one from a friend that will amaze you.

First, there’s heading out for a walk in the park with my dad. We did spend the day at the hospital Wednesday, but I thought I’d skip the obligatory ER selfie and share our epic excursion instead. Much more encouraging.

Then there’s the still life, “School cap and cricket bat.” Talk about an image loaded with story. Both are from my school days at the Harvey Grammer School in England, and they represent the extremes of my education.

I Woke Up Eventually:

If I had been half as interested in the academics the school was nationally renowned for as I was in playing games like soccer and cricket, then I would likely have ended up at a prestigious English university. But then – and this is the wry irony of it all – I would not have stumbled (sideways and backwards) into Stetson University in Florida, and I would not have met Rebekah, and as a result there would have been such a rift in the space-time continuum that consequences too catastrophic to imagine may well have occurred.

So it’s probably a good thing I goofed off in class. I’m just saying….

Then there is this shot taken from our kitchen. I intended for it to feature Scout, but she was all like, “no more paparazzi!” and flopped down in disgust. But I liked the feel and the balance of the shot so it stayed.

I’m serious about Scoutie becoming increasingly camera-shy. She literally turns her back to me now when she sees me frame up a shot, or walks away, or flops down out of the picture. 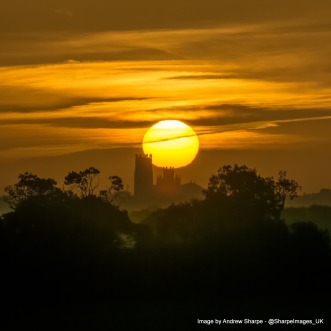 And, finally, here is one of Ely Cathedral in England, taken by English photographer Andrew Sharpe. Some of you may remember that I used his image of the cathedral on the front of my World War Two novel, “Suddenly the Light Was Gone.”

I follow Andrew on Twitter and he often posts amazing photographs of the landscape around the “island” city of Ely. I saved this one a couple of days ago. I’d recommend checking out his photography site – SharpeImages.co.uk –

Anyway, enjoy the pictures, but don’t let this cold, wet, dreary weather (it’s 34-degrees and raining here in Wake Forest) keep you inside. I’m excited about church, about Rebekah’s message today, and about the ordination service for several new elders and deacons. Grab a coat and your umbrella – I’ll see you in church. 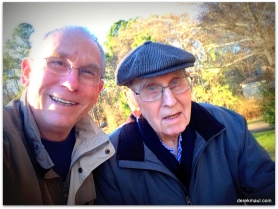