They were on their way up to Jerusalem, with Jesus leading the way, and the disciples were astonished, while those who followed were afraid. Again he took the Twelve aside and told them what was going to happen to him. “We are going up to Jerusalem,” he said, “and the Son of Man will be delivered over to the chief priests and the teachers of the law. They will condemn him to death and will hand him over to the Gentiles, who will mock him and spit on him, flog him and kill him. Three days later he will rise. – Mark 10:32-34

This has been an extremely busy, sometimes difficult week. So “Five-Photo-Friday” is going to be a challenge if I’m going to give a good reflection of these past few days.

I will start here because it was one of those accidents that spoke volumes in terms of message. The sanctuary was full even though close to one hundred regular attendees were two hours away at the church retreat, Rebekah preached a powerful message about being fully engaged followers of Jesus, and there was a “buzz” of life around the church campus.

Then the elders came forward and it was time for the Lord’s Supper. The bread and the wine symbolizing the powerful invitation of Jesus – not just to remember but to participate. Rebekah broke the bread, she held up the cup, she put the elements back on the table – and then the cup toppled and the wine spilled, flowing everywhere and covering the table…

… Covering the table with grace – and isn’t that the point? Isn’t that the point of the bread and the wine, that the symbols of Christ’s death are necessarily messy, getting all over everything, not containable in a cup, or a ceremony, or a church, or a denomination – maybe not even a doctrine if it is too narrowly conceived?

Rebekah paused, looked out over the congregation, and instead of being mortified she said, “Look! I baptized the communion table!” And the symbols came together and spoke as one. The water; the font; the table; the bread; the wine; the invitation.

There are lots of pictures at this link – WFPC Retreat – but this one is extra. Rebekah and I happened by the craft hut during our afternoon walk and stopped off to make a mess and have some fun.

For me crafts is more about the journey than the destination and it turned out to be a good thing we value process more than results when it comes to “art”. I’m not exactly sure what it is that we all made, but that didn’t really matter because it was a community activity. 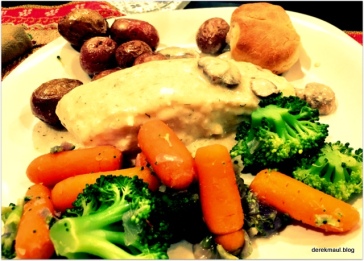 I have mentioned before that I need to up my cooking game a little, get into the recipe books some more, show a little creativity. This week has consequently seen some more imaginative meals here at Maul-Hall.

The fish was a big hit. If you haven’t tried Halibut before it’s worth spending a little extra to serve the meaty texture and mild flavor. All I did was to drag the fillets through some flour laced with sea-salt and lemon-pepper, then cook it at medium heat on a pan in just a tablespoon of olive oil. About three-four minutes per side.

Meanwhile I roasted some small red-skinned potatoes and prepared a mixture of Caramelized red onion, carrots, and steamed broccoli as the vegetable.

The sauce was a simple white-sauce (butter, flour, milk) with dill, tomato, grated parmesan and a little horseradish. I served on hot plates (it is winter here) with a couple of Rebekah’s buttermilk angel-biscuits.

The other featured dish is what happens when you have an extra fillet mignon and a dozen shrimp. Make a great salad (including nuts and feta cheese), then quickly cook up the steak and shrimp, dropping them on the salad hot and delicious. A Greek vinaigrette proved the perfect dressing.

We are now in the third day of Lent. I don’t think of these forty days as a dark journey so much as an occasionally solemn one that leads to the cross.

The cross is always front and center in our worship and our day-to-day living as disciples, not because it represents death but because it is an invitation that leads to life. I love to talk about Jesus as God’s invitation, but it is an invitation secured at great cost. Lent helps me to remember how deep and how complete and how selfless God’s love is.

So here are the photos. I pray that your journey to Easter will be full with images that draw you closer to God’s initiatives of love and grace. Peace – and more – DEREK 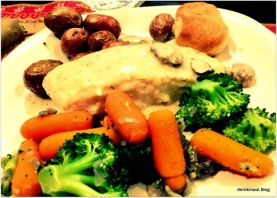 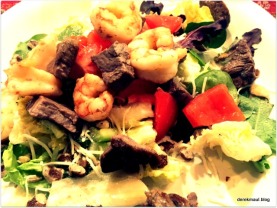