We always thank God, the Father of our Lord Jesus Christ, when we pray for you, because we have heard of your faith in Christ Jesus and of the love you have for all God’s people— the faith and love that spring from the hope stored up for you in heaven and about which you have already heard in the true message of the gospel that has come to you. In the same way, the gospel is bearing fruit and growing throughout the whole world—just as it has been doing among you since the day you heard it and truly understood God’s grace. – Colossians 1:3-6

I’m starting with a question: When was the last time you talked seriously with another person about your spiritual life, or simply about matters of faith? When was your last conversation about prayer, or about what you learned when you opened the scriptures? Is the work and presence of God a familiar topic you discuss, is the name of Jesus well acquainted to your lips?

The reason I ask is that – while I don’t keep a running count – I realize that over the past few days I have found myself engaged in at least a half-dozen such conversations, interactions that would be classified as extremely deep, consequential, and spiritually searching. Not just in small groups at church but with Rebekah, at a meal with friends, standing in the parking lot catching up with one of the guys.

I want to draw attention to a couple of them; not to violate any confidences but to illustrate how important it is that we learn to listen to one-another with our hearts, our spirits, as well as our ears.

One friend is a retired minister. He once occupied a pulpit where his preaching was considered prophetic, and his words reached a lot of people. He told me he would not preach again even if he was asked because, “I was a lot closer to God when I was preaching.”

My friend understood that a deep walk with God was part and parcel of his role as minister but believes that now, no longer bringing a prophetic word to hundreds of people every week, losing contact with God simply comes with the retirement territory.

But I didn’t buy that. I believe God misses a deeper communion with my friend and would love to continue the walk – and I also believe that my friend would too. I suspect he is just afraid of what it might lead to. We’re going to have to talk some more.

In the other conversation a friend told me about an incident he had experienced that gave him hope for humankind in general. He shared the story and explained how what happened helped him tilt away from cynicism and toward belief in the inherent goodness and reasonableness of people.

I thanked him for that, and we talked about how it is only the negative, the destructive, and the evil that seems to get front-page attention in this world. Mark helped to re-set my thinking if only a little. Sharing from his heart ministered to my heart. We’re going to have to get together and talk some more.

We are all spiritual beings:

What I’m getting at this morning is the fact that we are all – every last one of us – spiritual beings at the fundamental, essential level. We were created with relationship in mind – a deeper communion with God and with one another. It nurtures our souls to engage in conversation and mutual encouragement that feeds the spiritual core of who we are as creatures created in the image of God.

I’d like you to do two things in response to this idea: 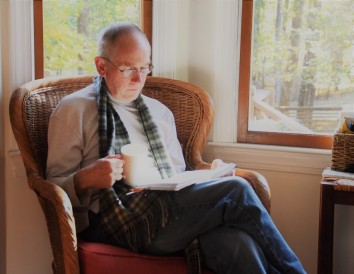 The possibilities, it turns out, are only limited by our faith and our imaginations.

This is not optional like a club membership or a choice of recreational activity; we are beings of light and grace, fashioned in the image of God. This is who we are.

And that is something worth talking about – DEREK