A few thoughts on Islam, Christianity, and the Duke controversy…

That said, I’m still not going to thank evangelist Franklin Graham for accusing Duke University of promoting the rape, butchering, and beheading of non-Muslims in the name of religious pluralism (read his full quote in today’s lead N&O article).

Graham also said that using the university chapel tower for the call to prayer is “wrong because it’s a different God.”

In addition to Graham’s rhetoric – and in support of it – the university received hundreds of angry phone calls and emails from “Christians,” messages characterized as extremely vitriolic, and that – ironically – included enough threatening language to raise security concerns. 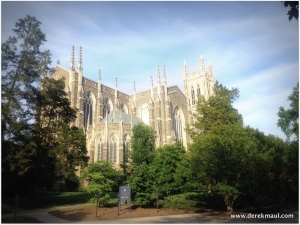 FEAR: It seems to me that Duke has been working hard to promote understanding and mutual respect, cultivating an atmosphere where mistrust and fear are replaced by cooperation and dialog,..

But maybe that’s exactly the problem for the hate-baiters? Maybe cooperation and understanding threaten the core message, a credo that is evidently fed by fear and mistrust? Maybe it’s not the call to prayer that offends Graham so much as the idea that some people are successfully chipping away at the divisions this view of the world thrives on?

ONE GOD: Then there’s the whole “different God” thing. Christianity, like Judaism, is a monotheistic religion; we believe in One God. Islam is also monotheistic. Graham’s declaration that Muslims worship “a different God,” seems to suggest that he believes there is more than one? That makes no sense at all!

Of course, Christianity and Islam are radically different belief systems; the call to follow Jesus as Lord and Savior is the most essential element of a restored relationship with God. But God is God, and my Muslim brothers and sisters worship God too.

BOTTOM LINE: Here’s what I believe. I believe that it’s critically important that faithful Christians and faithful Muslims take the lead in demonstrating to the world that hatred, manipulation, coercion, marginalization, violence, and the threat of violence are completely unacceptable responses.

We do nothing to compromise God’s reconciling initiative of grace through Jesus when we reach out to other faiths via what we have in common. If the Incarnation is still real, and relevant, then Christ will be alive and evident in us through our eloquent witness to love.

Enough with the vitriol, please; it has nothing of Jesus in it – DEREK