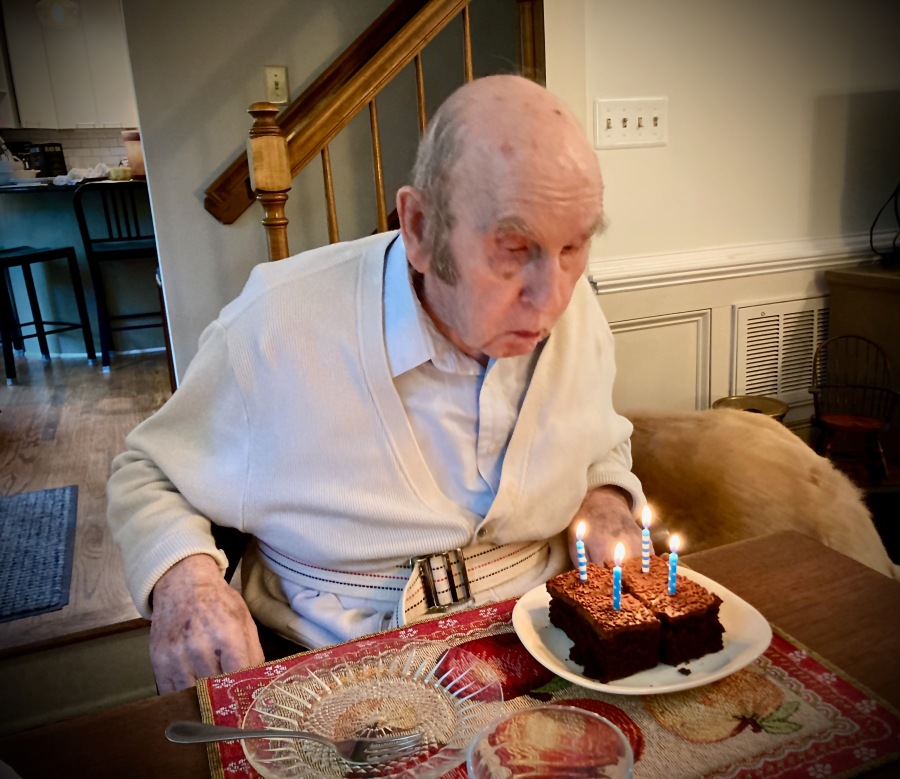 But the godly will flourish like palm trees
and grow strong like the cedars of Lebanon.
For they are transplanted to the Lord’s own house.
They flourish in the courts of our God.
Even in old age they will still produce fruit;
they will remain vital and green.
They will declare, “The Lord is just!
He is my rock!

Here is a little follow-up from my dad’s birthday July 27. Just a few pictures and thoughts from another major milestone in the life of one of the most genuinely good people I have ever known.

I told my dad that a 93rd birthday allows him to order absolutely anything he wants for dinner. I was expecting maybe the Olive Garden Shrimp Alfredo he likes so much, or the crab cakes from Briggs. But he surprised me by asking for the most classic “comfort food” possible.

It may not be Thanksgiving this month, but I still spent the day preparing a roast turkey, roasted potatoes, gravy, caramelized carrots, broccoli, and buttermilk biscuits (Rebekah made the biscuits).

Having enjoyed the feast ourselves, and looking forward to turkey sandwiches today, I believe it was a great idea.

The meal was, essentially, my gift to dad. As we discussed in yesterday’s post – “Our Essential Mission is Unchanged” – there is almost nothing in terms of material goods that would give him joy, and everything about having dinner together as a family that does.

The card I found, though, was epic. I have to share it with you. Kudos to the card design folk, because we all know how impossible it is to find anything that’s not sappy, boring, or rude. In fact, maybe Greetings Card stores should organize their offerings under the following categories.

Anyway, we made it through Dad’s special day and now year number 94 is officially under way. May the words of the Psalmist resonate in your experience: may you flourish like a palm, grow strong like the cedars of Lebanon, produce fruit, remain vital and green, and declare the Lord is your rock. Until, eventually, you are “transplanted to the Lord’s own house.”

One thought on “birthday notes, comfort food, and an epic card”